well no, it's not possible, not right now.

A while back I asked an apparently rhetorical question (nobody answered) about whether it would be possible for 2 veteran horse racing professionals to disappear from the business for 5 years and then return to start a new racing stable from scratch in the US.  We tried to do it starting April 2009 and we gave up about 1 year later.  Even with the advantage of our own investment startup money, we were not able to sustain the business, also despite our previous 30 years of experience, contacts, former successful investors, early success with a small stable, all new technology to help attract and retain clients, in short every possible advantage.  So what was the problem?  I will try to summarize:

1. race purses are not high enough to sufficiently offset the costs of racing, shipping, routine veterinary work, feed and payroll.   You might be OK if you always finish 1st or 2nd with every horse or if every horse has an owner willing and able to pay $75/day toward the maintainence of each horse.   In order to get started we had to own a few horses or take half ownership of client horses, and we had too many 2nds with those horses. So in a race with a $10,000 purse, we had too many finish 2nd for a 20% share or $2000 instead of a winner's 60% share or $6000.  A 2nd place finisher earning $2000 only covered his own expenses for 1 month.  If that horse needed 2 months between races, we are in the hole if we own him.  We had 7 wins, 10 seconds, 4 thirds during the year - if 2 or 3 of those 2nd placers had won we might have broken even most of the year.

2. we were unable to recruit an owner willing to send us a horse and pay $75/day toward his care.  It was our experience that for owners to be willing to take a chance on our start-up (even if they were our former clients in years past), they required a significant discount on day rate, generally $55-$65 was the day rate they would pay.  It was our experience racing in Kentucky, Indiana, Illinois and Florida that this rate will not allow a trainer to break even on shipping, feed, payroll and the cost of rental housing while traveling - especially if too many horses finish 2nd instead of 1st.

I think this is part of the reason for the trend toward the mega-stables, the old "economy of scale" rule.  These stables have enough cash flow to keep the whole machine running even if some owners get behind on monthly invoices.  A small start-up can't carry owners who get behind because they must have enough cash on hand to make payroll and to buy feed.  Unfortunately in a mega-stable, the individual horse is often lost in a crowd.

3. we were unable to organize partnerships of 2-5 investors to claim horses.  This may have been due to the state of the economy in 2009 and 2010, because we had 8-10 investors interested who backed out when it came time to deposit several thousand $ with the track bookkeeper.  Most people said the timing was bad.  If we could show them something about the investment to help them see it as a way to help their business with networking opportunities, then things might have been different.

A private club for owners at the track would work wonders - most tracks offer trainers some options to give owners access to a jockey club suite or dining room reservations when they have a horse "in", but these are very ineffective for attracting new owners.  The track needs to have a big room with easy access to paddock and winners circle for elderly owners or those who can't deal with crowds, food and drink in a chic atmosphere, and only open to licensed owners with 5% or more share of a horse and licensed trainers - and no additional membership fee - essentially an upscale "horsemen's lounge". One reason tracks don't do this is because they don't know who the owners are - the corporate office, the racing office and the bookkeeper don't share owner and trainer data.  An owner has to go through a time consuming and expensive process just to get licensed, giving all their personal data to the state's racing commission, including percent ownership and home address, yet when you call the bookkeeper to get a check from your account they have no idea what your address is?  The "front side" (corporate) and the "back side" (horsemen) of the tracks don't usually work well together if at all and that's a shame.

4. synthetic tracks were a big, major problem for us.  If you have a horse that has never run on a synthetic track before, but the only available race when he is ready to run is on synthetic then it's a huge gamble to try him on it.  A small stable can't afford to gamble like this but we felt we had to do it, and in every case we lost the gamble either due to a very consistent dirt or grass horse not handling the polytrack at all, or due to injuries on polytrack.  If you don't have an owner to pay the upkeep, the only way for the horse to support himself is to race.  If the horse doesn't like synthetic, you have to ship to the dirt or turf race and that costs money that the owner is gambling to recoup in the race.  Shipping is very expensive.  So you end up gambling on the shipping expense or gambling on the surface, neither is sound business. 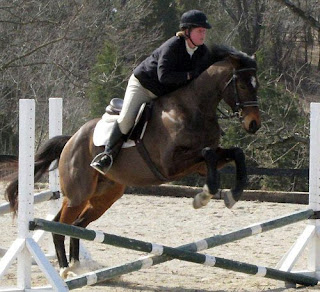 We had 3 injuries all year, all on polytrack, one during a race at Keeneland which was a race career ending suspensory (we gave him away so we took a huge loss, but he is now a show horse so that's a bright spot, see his recent photo taken January 2011 at right), one during training at Keeneland which was a hind pastern fracture requiring 3 months rest, and one front tendon in a race at Arlington in which our horse finished 2nd (we sold her at a $10k loss).

So we plan to return to Saudi Arabia to train for a single owner with 20-30 horses.  Racing thrives there due to infusion of money from wealthy owners and businesses who want to promote their products and services to racing fans while networking with other individuals and businesses who have the same interests.  I'll continue to look for ways for everybody in the business to be more successful, and I'll let you know how it goes.
Posted by amy4hsales at 7:04 AM 1 comments